Wednesday, June 3rd, 2020 will be remembered as extremely busy, yet fulfilling day for the members of LFC. It was a day that we, as a department, had circled on the calendar for several weeks. On this day, our longest active Life Member, Howard Hershey, celebrated his 70th birthday. Howard joined the Lafayette Fire Company in 1969 when the Western edge of East Lampeter Township was just starting to flourish with suburban sprawl. In those days we turned just over 60 fire calls a year. We now normally average between 500-600 fire calls a year. Howard has served our company in just about every position or capacity a member can fill, including Fire Chief.

The company was contacted by Howard’s family about having a parade for him to honor this milestone event in Howard’s life. We were happy to oblige and reached out to several neighboring mutual aid companies that have worked with Howard regularly on fire calls to see if they could participate. In a true showing of brotherhood, every company stepped up and committed a unit to the event.

If you are familiar with our fire company, you know that we still operate a 1978 Mack CF pumper in a reserve capacity. The unit is due to be replaced next year so it’s days of being an in-service unit with us are numbered. Howard has been a member long enough to have seen this pumper be delivered to us brand new from the factory. The quality craftsmanship that Mack was known for, and the meticulous care this pumper has received from LFC members like Howard is what has kept this engine in front-line service for over 40 years.

Yesterday, our 2003 Pierce pumper which serves as our primary engine was out of service for yearly maintenance. This is a normal annual occurrence. When the Pierce pumper is down, the ’78 Mack moves up to be the front line engine.

During the mid-morning hours yesterday, a large commercial building fire was dispatched in Bird-In-Hand’s area on Monterey Road. When the 2nd alarm was transmitted, the LFC was dispatched for both Engine 63-2 (the ’78 Mack) and Truck 63. Normally, we would take Truck 63 first to a structural fire. But for this blaze, Command had a greater need for engine companies and asked for the engine to respond first. As fate would have it, Howard was able to drive the Mack pumper on his birthday to a multi-alarm fire. On arrival at the scene, Engine 63-2 was ordered to lay an additional supply line into the scene. Engine 2 ended up dropping all 1200′ of 5″ supply hose in the field plus two and a half additional 2.5″ lines to assist getting much needed water to units that were engaged in a heavy fire fight.

Howard returned with Engine 2 and the rest of the crew around 3:30pm. Several members reported to the station and were able to get Engine 63-2 back in service and a majority of the hose cleaned just as apparatus began arriving for Howard’s parade (Howard had already been relieved to go home to get ready for his party. He had no idea the parade was happening).

Once the apparatus had been lined up and all his family and friends were ready, we stepped off the parade at about 6:40pm. We were thrilled to see the surprised look and huge grin on Howard’s face as all the apparatus and well-wishers had a chance to show their love and appreciation for our dear friend.

In addition to the fire in Bird-In-Hand and the surprise parade for Howard, we also made another parade appearance for a special birthday in the neighborhood (We’ll post more about that event later).

We can’t say thank you enough to all the fire companies and friends and family that made Howard’s birthday one to remember. We are very happy that we were able to manage it all in stride for our most dedicated member, Howard Hershey. 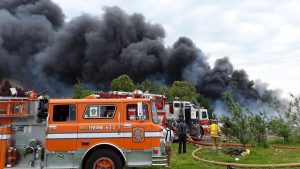 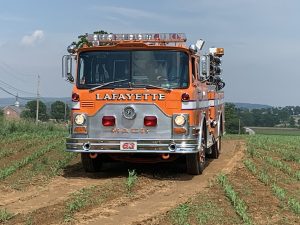 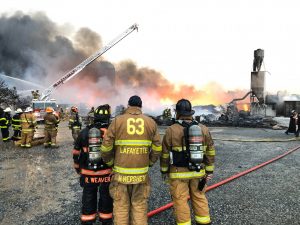 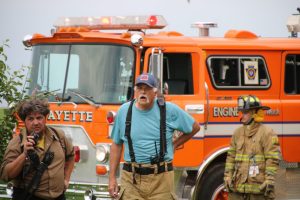 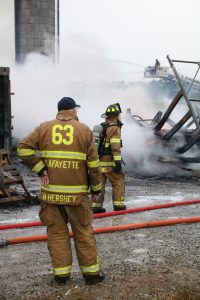 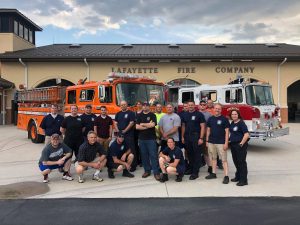 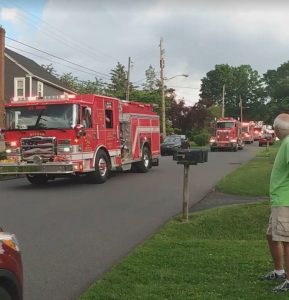 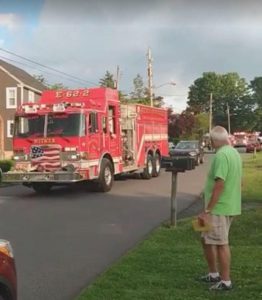 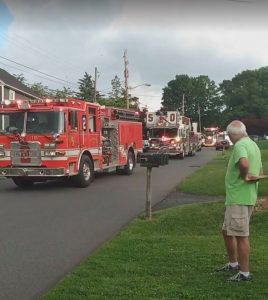 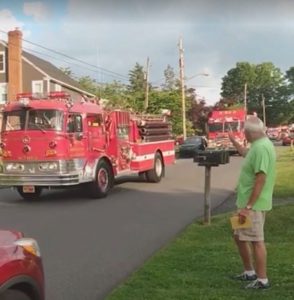 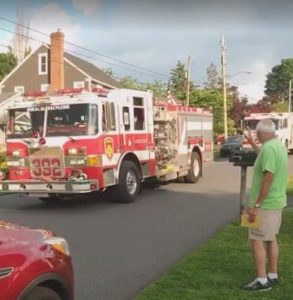 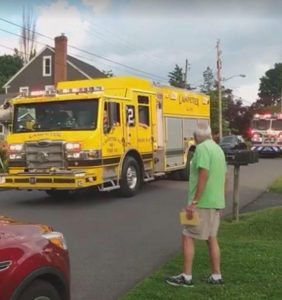 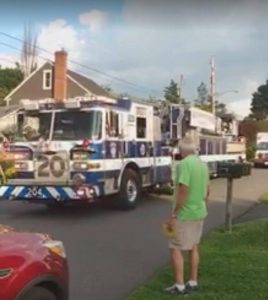 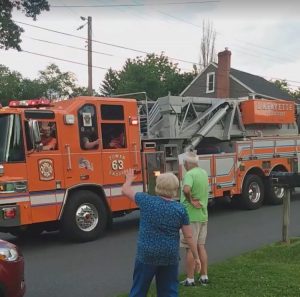 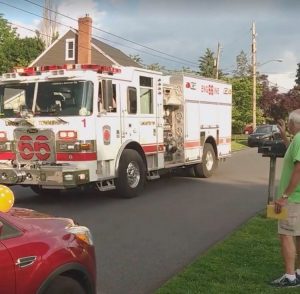 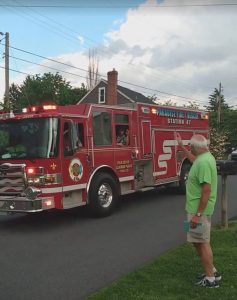 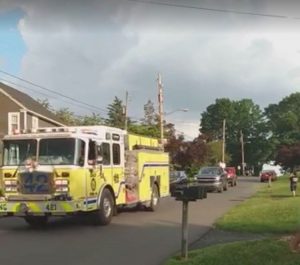 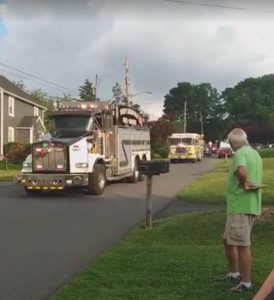 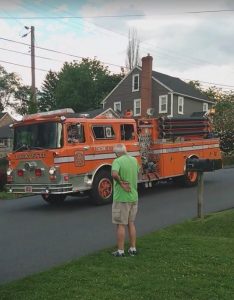 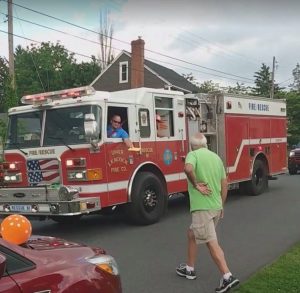 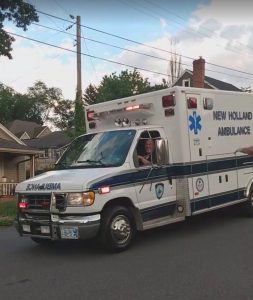 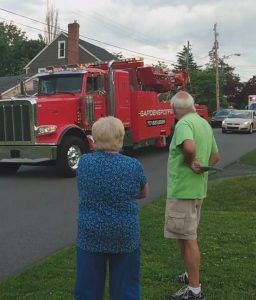 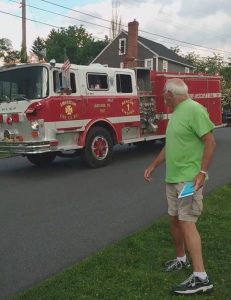 Happy Independence Day from the Officers, Directors, and Members of the Lafayette Fire Company. We thank those who granted us our freedom, those who protect that freedom, and those who protect our communities within the great country we all live in.

If you are setting off any fireworks this evening, please look into your local municipalities ordinances to assure that you’re following proper rules and safety precautions.

Have a safe and happy 4th! ... See MoreSee Less

Are you looking for a new way to give back to your community? Stop by on a Monday Evening after 6:00PM and see what we have to offer!

Although running a fire station mostly involves running emergency calls for service, we could ALWAYS use more help with fundraising and administrative duties.

Firefighter (18+, all training provided and paid for, answer alarms from home when they come in and when said member is available)

Junior Firefighter (Age 14-18, EXCELLENT learning opportunity and training for those interested in becoming a firefighter)

Fire Police Officer (18+, responsible for directing traffic in and around emergency scenes, while ensuring the safety of working crew members on the fire ground)

These are ALL volunteer positions that you could easily work into your schedule during your free time, as all of our members do. Most of our members work full time jobs and still make time to provide for our community. You can too! ... See MoreSee Less