Early this Morning, Engine 63-1 was dispatched to assist Company 54 (Lampeter) with a reported Dwelling Fire in the first block of Meadow View Avenue. Neighbors in the area reported the back of a dwelling on fire in the area. West Lampeter PD arrived to confirm the reported working fire on the “Charlie” side of the residence. Engine 63-1 was the first arriving fire unit and secured a water supply, while getting a 400’ attack line to the rear of the residence to begin knocking the bulk of the fire. Engine 63-1 was assisted with members from Company 54, as their members pulled a line to the front door in the case of there being extension into the home. Truck Company 50 (Willow Street) assisted by cutting the deck free of the home, to eliminated any hazard.

Units were on scene for about 1.5 hours. 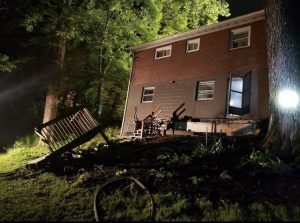 Do you own a business along the strip? We always prioritize safety and keeping traffic flowing so that both your staff and patrons can arrive safely.

If you live or work near Lafayette Fire Company during the 6am-5pm hours: we need your help as firefighter or fire police. Please let us ask your boss for permission for you to help our community. Most of our active members work outside of our area of coverage during the day and even serve with other fire companies while they work. We are asking that other fire members and people with daytime availability that work in our area will consider doing the same. Use your talents to serve others. We’ve got a shift for you! Training and gear provided for free.

Congratulations, Doug! Doug served with Lafayette prior to retiring, as he responded from work. He was instrumental in our computer network setup in our new firehouse and always prioritized chauffeuring our daytime response. We appreciate your service to Lancaster County! #volunteerfirefighter #volunteerism ... See MoreSee Less

Congrats Doug. You were great to work with at CV!

He’s such a great Man. He used to run fire club back when I was in school at CV. Dereck Duffy do you remember him from fire club?

Congratulations and thank you.

Thursday Thought: We've got room in the photo for YOU!!
If not you; then who?
Meet our Lafayette Fire Company Members by the numbers:

*Duty Crew Members (Live outside the area, typically serve or have served with other fire companies and required to volunteer a minimum of 8 hours per month)

JoinLafayette.com or show up on a Monday at 6:30PM

Riley Weaver looks great as does everyone else!

Looking great. Thank you all✌❤🙏🚒