This morning, Lafayette Fire Company Bird-in-Hand Fire Company, Witmer Fire Protective Association, Ronks Fire Company, Manheim Township Fire Rescue, Strasburg Fire Company #1, Gap Fire Company, & Lancaster EMS responded to a Building Fire in the 2200 block of Lincoln Highway East at the Country Inn & Suites. The fire alarm company had reported an alarm activation within the building and nearby callers reported fire on the outside of the building. With this information, the building fire assignment was struck. The visible fire of the HVAC unit was mostly extinguished by nearby S.A. Communale Fire Protection Contractors using several fire extinguishers. Units on scene ensured the fire was out, removed the HVAC unit, checked for extension and setup ventilation to help remove the smoke from the building. Firefighters were on scene for nearly 2 hours.

A special thank you to Cartoon Network Hotel that brought cold water and snacks for firefighters and the hotel occupants that patiently waited to return to their rooms. 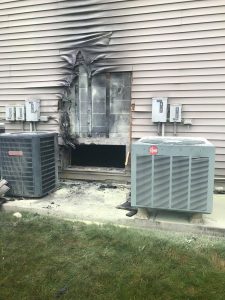 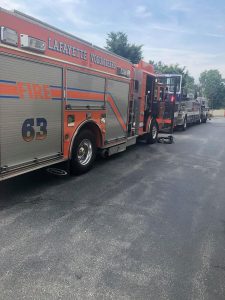 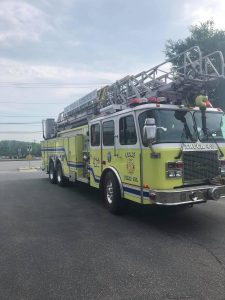 Second Fire for the Truck in Just Over 24 Hours

On Tuesday July 6th, Truck 63 was alerted for another structure fire in the unit block of Chickadee Circle in Leola. Additional information from LCWC reported a fire in a closet. Chief 61 arrived first and confirmed a working fire in the living room of the home.

Because Chickadee Circle is a cal-de-sac, and thinking access for the truck would be limited, the decision was made to access the scene by driving through a field off of Horseshoe Road. Doing this put the truck in perfect position to cover the rear of the row of homes.

As with normal truck operations, the crew split up. Half of the crew went interior to complete searches on the floor above the fire while the exterior crew prepared for ventilation. Primary and secondary searches were found to be negative and there was no extension to the upper floors. Once ventilation was well under-way, the crew was relieved by Truck 31.

After a short break, the crew assisted 61 with loading their supply hose before returning to East Lampeter.

On Monday July 5th, Truck 63 was dispatched to the 100 block of Beddington Lane in Strasburg for a house fire. Upon arriving, Truck 63 was able to position in the yard to get access to the upper floors of the home. The crew assisted the engine companies with forcible entry, searches, ventilation, and overhaul. A family pet was located inside the house during the search and was reunited with its owner. Truck 63 operated at this scene for close to two hours before returning to quarters.

Such a beautiful home. How bad was it inside?

Over the past 6 months, FF Reuben Stoltzfus has been working on a company pride table to seat all of our duty staff in station. The table was placed in our Day Room this afternoon upon completion. Making the table in-house, saved the company money and shows more of the pride put into the table.

Thank you for all of your hard work, Reuben! ... See MoreSee Less

Looks great! 👍😁 best wishes for years of friendships and problems solved at the table! 👍😁🧑‍🚒🔥🇺🇸🇺🇸🇺🇸🇺🇸

That looks awesome. I saw if before the decals were on and it looked great but it is beautiful!