Just prior to 0800 Station 63, 62 (Witmer), 54 (Lampeter), and 06 (Lancaster EMS) were sent to the 100 block of Crestmont Avenue for a reported gas leak. Additional information from the 9-1-1 Center reported a fuel oil spill in the basement of a home. Engine 63-1’s crew arrived to find approximately 200 gallons of heating oil had spilled from a tank in the basement of a house and leaked into a floor drain.

East Lampeter Township EMA made notification to our township’s public works and sewer departments who sent crews to the scene. The Lancaster County Haz-Mat team is currently on location assisting with mitigation efforts.

While on this call, Truck 63 was alerted to respond to a possible structure fire in Manheim Township. Engine 63-1 left this incident and returned to the station to staff the truck. That incident was found to be an HVAC issue and Truck 63 was recalled while en route.

Thank you to all the agencies that assisted us at this scene. #Teamwork #ELTTogether #FireDepartment #Lafayette #Volunteer 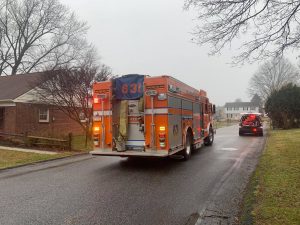 Thank you to everyone who has supported our Fasnachts for Fassnacht’s event. All fasnachts were preordered and will be picked up tomorrow! If you missed the sale but want to support this great cause:
Text “Fassnacht” to 41444 ... See MoreSee Less

The Lafayette Fire Company in East Lampeter Township is selling Achenbach's fasnachts on Tuesday in honor of Jan Fassnacht's honor. Jan, a volunteer firefighter with the company, died of cancer
View on Facebook
·Share

This week's featured photo is of our 1978 Mack CF Pumper prior to its refurbishment in 1992. We believe this photo was taken around the year 1986. ... See MoreSee Less

This evening, Squad 63-1 took part in the convoy for the homecoming of a firefighter from the Gordonville Fire & EMS Co.. Last weekend, while working a fire in Leacock Township the firefighter fell from a rooftop that the truck company had been operating on. This evening, he returned home from the hospital, followed by about 20 fire and EMS units.

Our thoughts are with the firefighter on a speedy recovery. Welcome home Brother! ... See MoreSee Less