Around 04:30 on Saturday morning, the LFC and surrounding agencies were dispatched to the 200 block of Brook Farms Road for a reported house fire. Multiple calls from neighbors reported fire showing from a single family dwelling.

Engine and Truck 204 from Manheim Township’s Eden Station arrived first and confirmed fire throughout and through the roof of a house. Engine 63-1 arrived next and laid their entire arsenal of supply line down Brook Farms Road from Millcross Road. The supply line came up about 300′ short of the fire scene. Engine 62-2 (Witmer) arrived seconds later and finished the lay to Engine 204. They began supplying the scene with their 2500 gallons of water. The next arriving tankers from Witmer, Bird-in-Hand, and Manheim Township – Neffsville began a “nursing” operation on Millcross Road. A tanker task-force was requested due to the area not having any fire hydrants. Units operated for over an hour flowing close to 2,000 gallons of water per minute to darken down the fire.

Neighbors reported the house to have been vacant for many years but it was being used for storage. Due to the house’s heavy content, and amount of fire showing on arrival, crews were not able to make entry and had to take a defensive operation to extinguish the fire.

Later into the morning, the scene was reduced to the units from Lafayette and tankers from Witmer and Bird-in-Hand to finish up extinguishment. A trac-hoe from Martin’s Mulch was summoned to the scene to tear down the house. Units were able to return to service around 3pm. 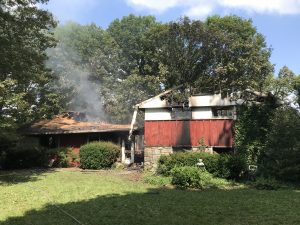 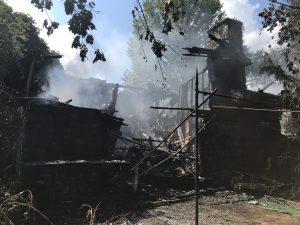