Yesterday afternoon at 4:19pm, the LFC was dispatched to Tanger Outlets on Lincoln Highway for a reported vehicle fire. Numerous 9-1-1 calls were flooding Lancaster County-Wide Communications reporting a large column of smoke visible inside the Tanger property. LCWC advised Captain 63-1 (Andrews) that some callers were reporting the building to be involved. The assignment was promptly upgraded to a structure fire.

Captain 63-1 arrived first to find an extremely large fire inside the retention pit where an on-going construction project has been taking place. The material that was on fire was made of plastic and rubber and was already well involved. The fire was quickly growing in size and it was giving off intense radiant heat which was endangering an entire strip of stores.

Engine 63-1 was the first arriving suppression unit. The crew of four firefighters were able to secure a water supply from a nearby fire hydrant and immediately placed the deck gun and one 2.5″ attack line in service. The initial strategy was to protect the stores until additional help could get there. As the first alarm units began arriving, crews were immediately pressed into service to get additional attack lines placed between the fire and the building. Due to the amount of heat being generated by the burning material, it took several large caliber hose streams and aerial streams to gain the upper hand on the inferno. The water supply was quickly taxed and additional tankers were requested to assist with moving water to the scene. The Lancaster County Foam Task Force was mobilized and foam was used to finally extinguish the last of the flames. There was substantial damage done to many of the store fronts along the pit, but the fire was held from extending into the building itself.

In all, roughly 30 fire units from all of our surrounding communities operated at the scene along with countless support vehicles and personnel. We can not thank everyone enough for the help they were able to provide at this incident. Crews were on the scene until close to 9pm finishing up.

All photos presented are credited to the original photographers. 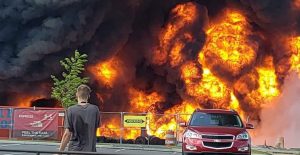 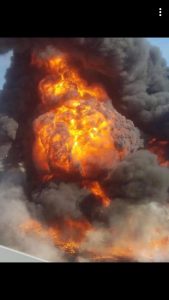 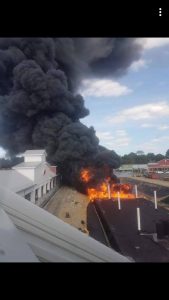 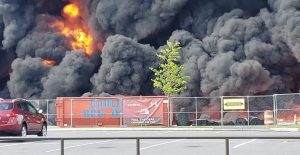 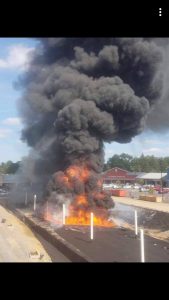 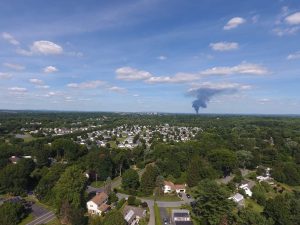