This past weekend, the NCAA Division I Field Hockey Final Four was held in Chapel  Hill, N.C. Five USA Field Hockey Umpire Members were selected to officiate at the finals based on their performance during the NCAA First and Second Rounds.

One of those umpires is our own Firefighter, Suzi Sutton!

“Part of the FIH Pro League Panel, Suzi Sutton has officiated 126 international matches since first picking up a whistle in 2007. She has umpired all over the world after earning her international badge, including the 2015 women’s Pan American Games in Canada, 2016 women’s Hockey Junior World Cup in Chile, 2017, FIH Hockey World League Semifinals in South Africa, 2018 Asian Games in Indonesia, 2018 Champions Trophy in China, 2019 FIH Women’s Series Finals in Japan and numerous USA test series. Sutton has officiated at two NCAA Final Four weekends since 2015 as a result of having international appointments fall during the same time.”

“It is an honor to be selected to umpire these important games for these young athletes and collegiate staffs,” said Sutton. “As I reflect on umpiring field hockey during this unique year, my hope is that they valuable life lessons learned through sport will lead to one of these talented athletes/staff members making a positive difference in our world for others in the future.”

The LFC is extremely proud of Suzi’s accomplishments as she has always been, and continues to be an upstanding reflection of herself, our community, and our company in all of her endeavors. 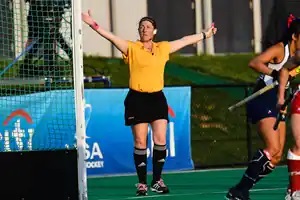 Photos and story courtesy of teamusa.org/USA-Field-Hockey

Do you own a business along the strip? We always prioritize safety and keeping traffic flowing so that both your staff and patrons can arrive safely.

If you live or work near Lafayette Fire Company during the 6am-5pm hours: we need your help as firefighter or fire police. Please let us ask your boss for permission for you to help our community. Most of our active members work outside of our area of coverage during the day and even serve with other fire companies while they work. We are asking that other fire members and people with daytime availability that work in our area will consider doing the same. Use your talents to serve others. We’ve got a shift for you! Training and gear provided for free.

Congratulations, Doug! Doug served with Lafayette prior to retiring, as he responded from work. He was instrumental in our computer network setup in our new firehouse and always prioritized chauffeuring our daytime response. We appreciate your service to Lancaster County! #volunteerfirefighter #volunteerism ... See MoreSee Less

Congrats Doug. You were great to work with at CV!

He’s such a great Man. He used to run fire club back when I was in school at CV. Dereck Duffy do you remember him from fire club?

Congratulations and thank you.

Thursday Thought: We've got room in the photo for YOU!!
If not you; then who?
Meet our Lafayette Fire Company Members by the numbers:

*Duty Crew Members (Live outside the area, typically serve or have served with other fire companies and required to volunteer a minimum of 8 hours per month)

JoinLafayette.com or show up on a Monday at 6:30PM

Riley Weaver looks great as does everyone else!

Looking great. Thank you all✌❤🙏🚒