Foam services at Lafayette began in 1979. Following a major fire at a local paving company it was realized there was a need for a bulk foam supply in the Lancaster area. After securing funding from the petroleum industry the 1951 Reo was modified by removing the water tank to provide an area for the storage of foam concentrate. This rig was very basic and merely carried foam and foam generating equipment. 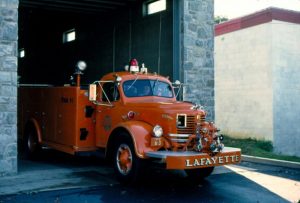 The second foam unit was a bit more practical. The 1965 Ford/Hahn was modified with crosslay hose bins, and the water tank was reduced from 1200 to 600 gallons allowing this rig the ability to function as the foam unit and as an engine company when needed. This unit flowed foam on several occasions including the Stauffer's of Kissel Hill fire in Rohrerstown in 1986, An overturned gasoline tanker in downtown Lancaster in 1992, and several aircraft incidents throughout the county. This rig was donated in 2000 after experiencing motor problems. 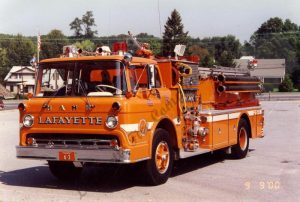 From 2000 until 2003, Lafayette's foam unit was a loaner pumper from the Witmer Fire Co. This 1967 Mack was equipped with a 1000 GPM pump and a 1000 gallon water tank. Equipped as a foam pumper this rig responded to several incidents while serving Lafayette including the massive Petroleum pipeline fire in Manheim Twp, and several fuel tanker incidents in Manheim Twp, Columbia and Marietta PA. This rig is still owned by Witmer as a parade piece. 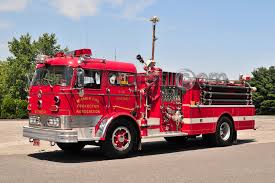 Current Foam Operations are conducted by Engine 63-2 and Foam 63.