Just before 9:00PM, Truck 63 was dispatched to the 600 Block of Wyncroft Lane in Lancaster Township for a Working Apartment Building Fire in the 66 Local. Truck 63 responding shortly after the Working Fire Assignment was paged out 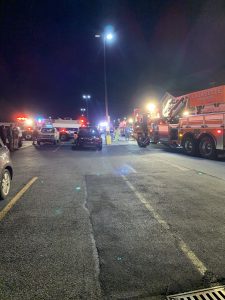 with 6 crew members. Once on scene, the tower positioned to work, but wasn’t needed due to a quick knock on the fire.

Just after clearing the Lancaster Township Assignment, Truck 63 was dispatched to the 1400 Block of Harrisburg Pike in Manheim Township for a reported Commercial Building Fire. An employee from the USPS Building had reported a smoke condition in the building but no visible fire. Truck 63 arrived to stage, but later was not needed and returned to service.

While the Truck Company handled these 2 street assignments, Engine 63-1 and the Duty Officer handled a Fire Alarm Activation and Reported Car Fire in our run district.

Don't forget, if you're going to Station 62 for their Ox Roast tomorrow, they are in need of patches. If you have an emergency services patch you can talk along to donate, please do!AREA FIRE DEPARTMENTS - Assistance Requested

During our open house, a visitor from out of town had stopped into the station to take part in the festivities and to pick up a station patch. His goal for the day, was to visit us and other county departments to secure as many patches as he could. Unfortunately, he suffered a medical emergency early in the day at Witmer. He has made a speedy recovery, but his trip to Lancaster was cut short before he could visit any other stations.

At Witmer Fire, we thought it would be nice to show our support for him and his love of fire departments. If you would like to assist us, please send us your company patch by October 28 and we will forward them all onto him.

Patches can be sent to Witmer Fire, ATTN: Chief Sherman, PO Box 58, Witmer, PA 17585-0058. If you have any questions, please contact Chief Sherman. We thank you for your assistance. ... See MoreSee Less

Tomorrow is National Move Over Day, which was created to promote awareness to the Move Over Law which is now being enforced in ALL 50 states.

Do your part, and ensure our nation’s emergency responders can do their job safely.

What does that mean? If you see emergency lights or disabled vehicles on a roadway, slow down, and move over. If you cannot safely move over to the next lane, you MUST slow down atleast 20MPH less than the posted speed limit.

Darn going to miss another homecoming. I really have to get this on my schedule a year in advance. Have not made a game in over 16 Years 😥. Have fun and be safe