On Tuesday, June 16th at 13:39 hours, Truck 63 was dispatched on the second alarm assignment which was transmitted for an apartment building fire at 607 Rockland Street in Lancaster City. Initial 9-1-1 callers reported large amounts of smoke coming from the attic area of the building. A short time later, people were witnessed jumping from upper levels of the structure to escape the flames. Multiple EMS units were sent to the scene to treat the injured. Truck 63’s crew was put to work on the roof and in the structure to assist with overhaul. Truck 63 operated at the scene for just under two hours. 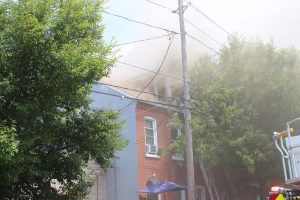